Ladbroke Grove is a well-known road linking the middle of Kensington and Chelsea at Holland Park Avenue, under the Westway and all the way to the northern boundary of the borough by the Harrow Road.  It’s the main north/south artery for the north of the borough.

The road also gives its name to this part of the borough, with the road linking with and connecting into many communities and destinations as it makes its way north, running parallel with Portobello Road for much of its length and linking with areas from Ladbroke Square, St John’s Church, St Charles Square, Wornington Green and over the canal to Kensal Green Cemetery.

But today Ladbroke Grove has problems that need fixing.  There’s too much car traffic, which slows down buses and creates pollution, road danger for vulnerable road users and noise.   The street environment needs amenity improvements like more tree planting and imaginative use of spaces to make it more people friendly. The road needs to be made easier to cross – whether for pedestrians or people on bikes.  And it needs to relate properly to the communities with which it links – and make sure they don’t turn into rat-runs.

RBKC have recently spent a lot of money – not that you’d notice.  We think they can, and should, do much, much better. They need to do better. With the near completion of Wornington Green, the planned redevelopment of Kensal canal side site as well as other huge developments on our doorstep at White City and Old Oak Common mean there will be significant pressure put on North Kensington’s roads and our communities unless RBKC takes meaningful action – RBKC must act to reduce exposure to dangerous traffic, air pollution and noise levels and deliver better streets for our health and wellbeing.

We’d love to hear from you with your ideas for the Ladbroke Grove corridor – please do get in touch at betterstreets4kc@gmail.com

Don’t look up, you will get sand everywhere…

RBKC have spent £680,000 to achieve not much at all on a walking and cycling improvement scheme that is now complete and is looking well, a lot like before.

Ladbroke Grove shows us what happens when the council lets select Resident Associations dictate design and hold a veto over walking and cycle infrastructure – the result is dangerous, not fit for purpose and a massive waste of money. This is not how we should be making transport policy especially when it plays such an important part in the response to the councils declared climate emergency and, in their efforts, to make some of London’s most dangerous roads safer.

What was the scheme?

On RBKC’s website during the consultation the scheme was summarised as a “cycle improvement scheme along with other road safety measures” intended to improve conditions for cycling and to improve road safety. Indeed, many of the responses to the consultation seemed to be in response to the dominance RBKC put on cycling in their plans. Such priority is clearly understood elsewhere in London however in a borough that has fought tooth & nail against cycle infrastructure it seemed the importance of sustainable travel had finally been recognised.

This 1.15 miles improvement project was budgeted at £680,000, that works out at approximately £570,000 per mile. Compared to £30m for the 0.4 mile stretch of Exhibition Road this would seem to be an appropriately economical option but sufficient to deliver great infrastructure to link residents & visitors travelling North & South. In our borough where cars are princes of the road & 4x4s are most definitely king, there would be expected issues to iron out & likely some fierce opposition as we have seen around the TfL Holland Park Avenue plans. However, in an area where 70% of residents do not own a motor vehicle, this scheme would reach into some of the most deprived parts of our borough, seemingly offering better connected safe sustainable travel options.

RBKC council had identified issues with the existing cycle lanes along Ladbroke Grove. These were the pointless narrow-painted lanes with sharp deviations at the start and end of parking bays. Not only did they present an inherent dooring risk to cyclists, but they usually have vehicles parked in them anyway. It was welcomed then that RBKC recognised that cycle provision on Ladbroke Grove was “inherently unsafe”. In their consultation report the council considers that it is important to make this route as safe as possible because “we recognise that many cyclists will still prefer the direct north-south route provided by Ladbroke Grove”. I hope the irony of this position in contrast to the council’s position on Holland Park Avenue cycle lanes is not lost on anyone.

What bold transformative vision was laid out for North Kensington’s main road? £680,000 is not insignificant. Well scratch the surface & it becomes apparent this plan is not quite as it has been billed. Of the £680,000 budget just £22,000 was for improving cycle infrastructure. What did we get for 3.2% of the budget for a “cycle improvement scheme”? You will not be surprised to hear, not a lot. 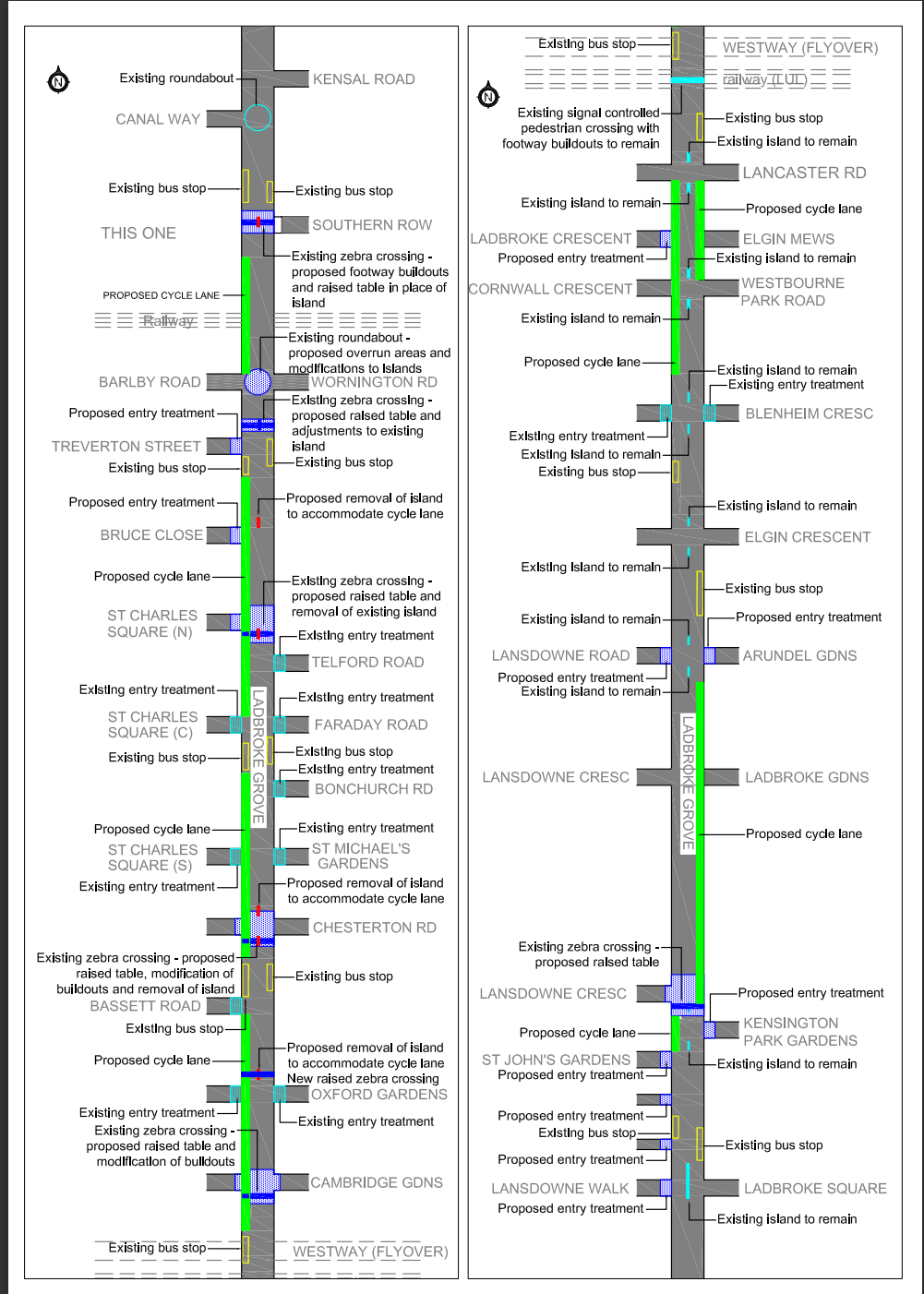 Drumroll…..the painted cycle lanes were replaced with painted cycle lanes. But these aren’t just any cycle lanes, these are Resident Association designed cycle lanes that start and stop but only on one side of the road at any one place, alternating between random locations where they could fit them without making any changes to parking, loading or road layout after the Ladbroke Association had insisted on no loss of parking along Ladbroke Grove. In North Kensington where most residents do not own a car or their home, why any Association made up of homeowners who mostly own one or more cars would prioritise parking is anyone’s guess. 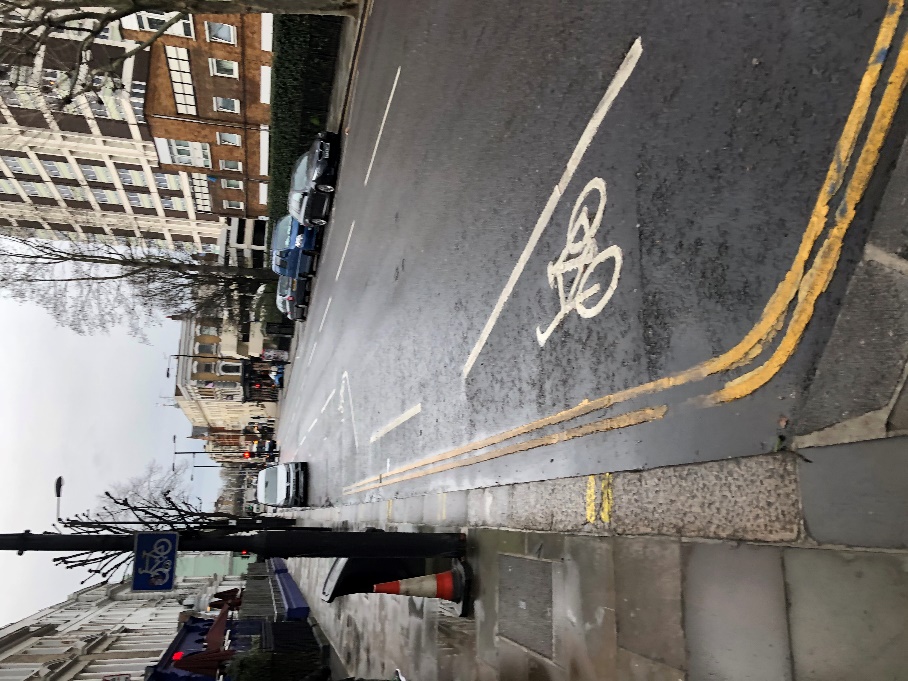 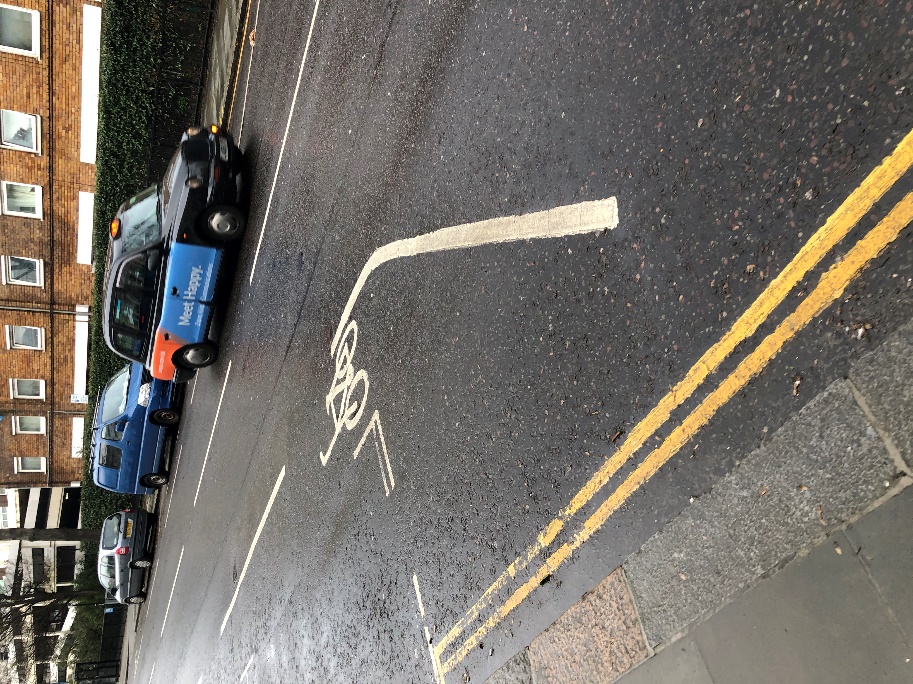 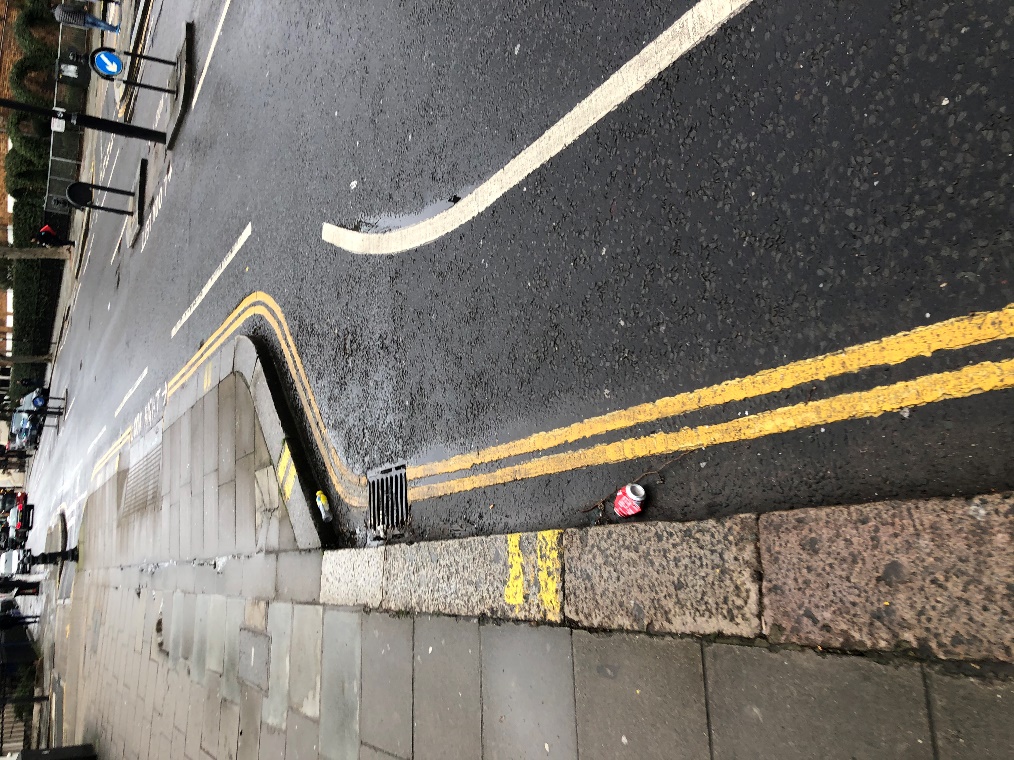 There have been some improvements, an additional zebra crossing on Ladbroke Grove just off the junction with Oxford Gardens was much needed and welcomed.

There have been some improvements, an additional zebra crossing on Ladbroke Grove just off the junction with Oxford Gardens was much needed and welcomed.

What was the scheme?