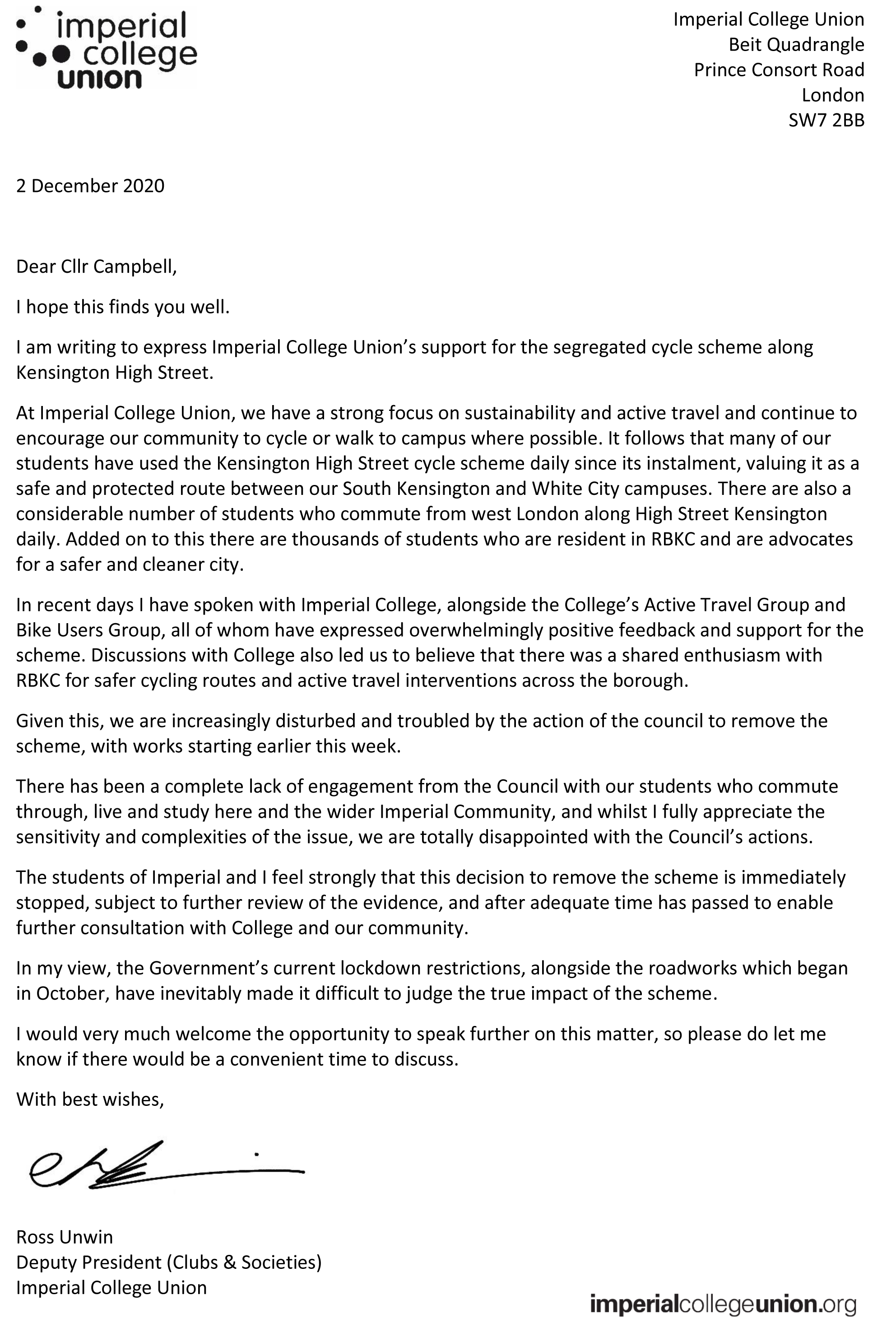 I hope this finds you well.

I am writing to express Imperial College Union’s support for the segregated cycle scheme along Kensington High Street.

At Imperial College Union, we have a strong focus on sustainability and active travel and continue to encourage our community to cycle or walk to campus where possible. It follows that many of our students have used the Kensington High Street cycle scheme daily since its instalment, valuing it as a safe and protected route between our South Kensington and White City campuses. There are also a considerable number of students who commute from west London along High Street Kensington daily. Added on to this there are thousands of students who are resident in RBKC and are advocates for a safer and cleaner city.

In recent days I have spoken with Imperial College, alongside the College’s Active Travel Group and Bike Users Group, all of whom have expressed overwhelmingly positive feedback and support for the scheme. Discussions with College also led us to believe that there was a shared enthusiasm with RBKC for safer cycling routes and active travel interventions across the borough.

Given this, we are increasingly disturbed and troubled by the action of the council to remove the scheme, with works starting earlier this week.

There has been a complete lack of engagement from the Council with our students who commute through, live and study here and the wider Imperial Community, and whilst I fully appreciate the sensitivity and complexities of the issue, we are totally disappointed with the Council’s actions.

The students of Imperial and I feel strongly that this decision to remove the scheme is immediately stopped, subject to further review of the evidence, and after adequate time has passed to enable further consultation with College and our community.

In my view, the Government’s current lockdown restrictions, alongside the roadworks which began in October, have inevitably made it difficult to judge the true impact of the scheme.
I would very much welcome the opportunity to speak further on this matter, so please do let me know if there would be a convenient time to discuss.

Let's bring clean air, safety and smiles to the streets of Kensington and Chelsea !

Does anyone else brave Kensington High Street on their way home and think — WHAT is that council doing? Dangerous, polluted, jammed. Horrible to cycle on. I now sing on my way down it to keep my spirits up.

When discussing bicycling in UK, often I hear the argument that “London is not Amsterdam”.
That of course is true.
Then I add: “And Amsterdam in 1970 is not Amsterdam 2022 either.”
#ActiveTravel is a choice.
A choice for health, cleaner air and sustainability.

Also more cycle hangers being consulted on in RBKC - do support local schemes as there is a big waiting list https://consult.rbkc.gov.uk/consultation_finder/?sort_on=iconsultable_enddate&st=open&sort_order=ascending∈=Parking+and+Traffic+Consultations&advanced=1#cs-finder-results-container https://twitter.com/betterstreetskc/status/1537366372623294465

Enabling active travel - this is good to see from @rbkc! Consultation below about enabling 🚲 travel on some one-way streets. The photo however reminds us of the bigger problems - a few 🚘 parked where the 🚲 lane was ! https://consult.rbkc.gov.uk/communities/two-way-cycling-2022/